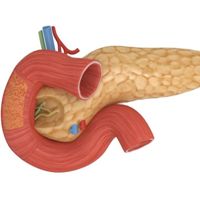 The pancreas is located in the abdomen, tucked behind the stomach. The pancreas has dual roles: it is an organ of the digestive system and of the endocrine (hormonal) system. Once food has been mulched and partially digested by the stomach, it is pushed into the duodenum (first part of the small intestine). The pancreas adds its own digestive juices and enzymes to the food, via a small duct attached to the duodenum. This process is said to belong to the ‘exocrine pancreas.’ The pancreas also produces the hormone insulin, which helps control the amount of sugar in the blood. This is the role of the ‘endocrine pancreas.’

These procedures can be performed open, laparoscopic and robotic depending on patients.

Also known as pancreaticoduodenectomy, it is performed to treat cancers at the head (wide part) of the pancreas. During the procedure, the head of the pancreas, the gallbladder, duodenum, a part of the bile duct, and sometimes a part of the stomach are removed. The remaining bile duct, intestine, and pancreas are then reconnected so that enzymes and bile can flow back into the intestines.

Infection, bleeding, diarrhea, weight loss and diabetes are common surgical complications of this procedure. You will be able to eat small amounts of easily digestible food and may have to take medications to assist digestion.

It is usually performed when the cancer is found in the middle or tapering end of the pancreas. This procedure takes less time and has a shorter period of recovery when compared to Whipple procedure.

A complete resection is opted when the tumor extends across the pancreas. During the procedure, the entire pancreas, the gallbladder, common bile duct, spleen, and parts of the stomach and small intestine are removed. Following the surgery, the patient loses the ability to create enzymes for digestion and insulin for controlling blood glucose level. Therefore, the patient has to take enzymes and insulin supplements for lifelong.

This procedure is primarily indicated for type 1 diabetes. It involves removing your pancreas and replacing it with a healthy pancreas from a donor. The surgery is performed under general anesthesia. Your surgeon will make an incision in the middle of your abdomen and connect the pancreas and part of the intestine from the donor with your blood vessels. Your pancreas is not removed, but retained to help in digestion. The surgery takes around 3 hours, and is sometimes performed along with kidney transplant, which then takes around 6 hours.

Following the surgery, you will be monitored in the ICU, and hospitalized for about 1 week. You will be prescribed antirejection medication to be used lifelong. The possible complications following the surgery include clots in arteries or veins of the new pancreas, development of cancers after a couple of years, inflammation of pancreas, leakage of fluid from the new pancreas, and rejection.