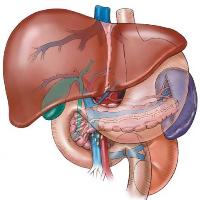 This describes the path by which bile secreted in the liver is transported via the hepatic duct and common bile duct to the intestine to aid in the absorption of fats and certain vitamins. The gallbladder is connected to the bile duct by the cystic duct. Blockage of the bile duct causes jaundice. The causes of blockage of the bile duct are most commonly stones or tumour, but can include parasites and benign strictures (narrowing).

Bile duct cancer is uncommon and is mostly referred to as cholangiocarcinoma.

Surgery of the biliary tract

This is mostly done for cancer and may necessitate removal of parts of the liver or pancreas.

The gallbladder is a small pear-shaped organ that lies underneath the liver and is attached to it.The gallbladder essentially stores bile which is manufactured in the liver and the bile then flows down a small tube (the bile duct) into the bile duct to help with digestion. Gallstones may form in the gallbladder and may cause pain, bloating, nausea and vomiting. Occasionally, stones may pass down the bile duct and cause either jaundice or pancreatitis. In western countries, approximately one in five persons will develop gallstones at some stage during their life.Gallstones can develop in quite young people and they tend to be more common in women than men and they can run in families. There are some occasional diseases which pre-dispose to gallstones.

If gallstones are symptomatic, it is generally recommended that they and the gallbladder be removed. Although the symptoms of gallstones may be intermittent, it is likely that complications will develop and these can be quite serious. Most patients who require removal of the gallbladder will have this done with keyhole surgery, but occasionally it will require a conventional open procedure.

Laparoscopic Cholecystectomy is the removal of the gallbladder using keyhole techniques. The vast majority of patients who require removal of their gallbladder will have it done in this fashion. There are usually four or five small cuts made in the abdomen to facilitate this, althoughoccasionally more or less may be required. Through these small incisions hollow tubes called ports are inserted so that instruments can be passed down these. Carbon dioxide is then blown into the abdomen to lift the abdominal cavity away from the liver, gallbladder and other organs.

The surgeon then puts a variety of instruments, including forceps and scissors down these ports to dissect the gallbladder free and small clips are placed to block off the tube leading from the gallbladder to the bile duct and also arteries. These clips stay there permanently and do not cause any problem.

Postoperatively, typically patients will go home on either the day of the surgery or the day following surgery. They will be uncomfortable for usually 24-48 hours, which will require some analgesia and will usually be completely recovered within one to two weeks. In the long-term,most patients can eat and drink quite normally but some will have a degree of fatty food intolerance and the very occasional patient will have some diarrhoea which requires treatment.